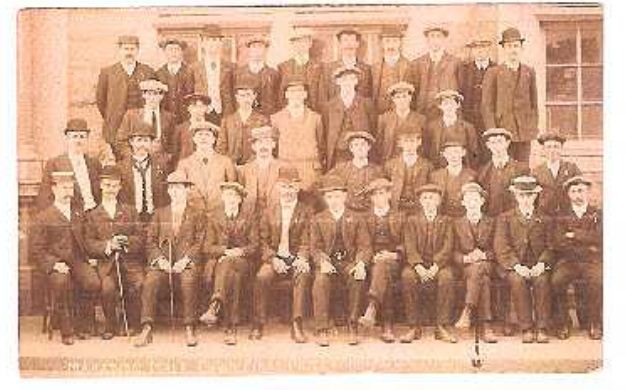 The choir was formed in 1904 by Mr Ted Harris and consisted of seventeen singers with a banjo as accompaniment. The real foundation was laid by Mr John Henry Trudgeon who was musical director for forty years. During this period the choir enjoyed many successes, winning its first County competition as early as 1910 and winning at many County Festivals after that.

The year 1950 saw the beginning of a golden era for the choir when Mr John J Matthews (now a Cornish Bard for his services to music) became its Musical Director.

After a period of reorganisation and intensive rehearsal, great success and national recognition followed largely due to his great enthusiasm and legendary high standards.

The Golden Jubilee concert in October 1954 was a wonderful occasion when the choir was joined, at the Ritz Cinema, Penzance, by the great Anne Ziegler and Webster Booth.

In 1958, the choir had a very enjoyable trip to London culminating in the winning of the championship at the prestigious London Music Festival. The adjudicator, Mr C Proctor, in giving the honours mark of 95%, described their performance as ‘resonant, polished, musical and deeply moving’. Winners of The Cornish Championship in 1959.

During this remarkable period, J J Matthews also conducted the Penzance Ladies’ Orpheus Choir and, starting in 1959, brought the two choirs together every year for 25 years for the very popular Two Choir Festivals.

In October, 1964 the Diamond Jubilee was a splendid occasion conducted by Mr J J Matthews at the Ritz Cinema with the world famous Joan Hammond as soloist.

The two choirs enjoyed a memorable tour to Bristol and South Wales in 1967 culminating in a wonderful concert with the Morriston Orpheus Choir in the famous Morriston Tabernacle. They received a very warm welcome and, in an electric atmosphere, the audience of 1500 demanded more and more!

This led to several television appearances in which the Apollo on its own and the combined choirs sang on such programmes as ‘Let The People Sing’ and ‘Songs Of Praise’.

Over the years, there have been many special occasions such as these and it has been an added pleasure for the choir to perform with such fine singers as John Treleaven, Benjamin Luxon, Ivor Emmanuel, Sir Harry Secombe, Alan Opie, Joan Hammond and Dame Vera Lynn; what a thrill it is to experience the emotion and excitement such performers generate.

One of the choir’s greatest achievements came in 1969 when the choir gained national recognition by winning the Advanced Class for Male Choirs at the Blackpool Music Festival in 1969.

1970’s
In 1970 the two choirs made their debut at the famous Winter Gardens, Bournemouth.

In 1971, the choir was honoured to take part in the Burma Star Reunion at the Albert Hall, together with the Penzance Orpheus.

This was a great occasion before a very large audience in the presence of the then Prime Minister, Edward Heath and Lord Mountbatten.

The success of this evening won them a return visit in 1973 when the Duchess of Kent was present and they were privileged to perform with Dame Vera Lynn.

In 1975, at Llangollen International Eisteddfod, the choir gained the highest marks awarded to a British Male choir when they attained an excellent second place.

Yet another memorable success followed in 1978 at Pontrhydfendigaid when the choir “beat the Welsh at their own game” as one newspaper described it.

The American Tour, centred upon Philadelphia, took place in 1979. There are members who still remember the stunning autumn colours of Philadelphia, the historic monuments of Washington, Niagara Falls and Valley Forge; above all, the choir enjoyed some splendid concert engagements.

Mr Nicholas Matthews, who had retired from the Apollo in 1973 after 17 years as baritone soloist, then accompanist and deputy conductor, returned to be its new Musical Director.
One of the highlights of his time as MD was the recital given in the world famous Coventry Cathedral in 1983.
Unfortunately, he had to retire due to ill health and his successor, Mr David Allan, took over in May 1984.

In 1987, under his leadership the choir won first place at the Nelson Arion Centenary Cup competition against thirteen of the top national choirs, a great achievement.
In 1989, once again they became the Cornish Open Champions.

1990’s
The new MD, Mr Derek Spedding took the choir to Paris in 1990 for a memorable tour during which they sang at UNESCO Headquarters and the famous American Church in Paris.

After serving two periods as accompanist, Mr John Phillpotts became the MD in 1992.

The 90th Anniversary tour took place in the Spring of 1994; this was again a wonderful experience as the choir had the honour of singing in York, Chester and Ripon Cathedral.

In July 1995, Mr Bernard Williams took over from Mr Phillpotts as the choir’s MD.

Due to ill health, Mr Williams had to give up the position after only one year.

Mrs Sheila Farmer, who had stood in as his deputy for several months, was appointed as the new MD in June 1996.

For family reasons she retired in 1999 and was succeeded by Joan Willams who stayed in the MD post until 2001.

One of the most memorable periods with Richard Braebrook as M.D. came in the spring of 2002 when the choir enjoyed a successful tour to south West Ireland.

Timothy Hosken took over as the choir’s Musical Director during Spring 2003. He was formerly Deputy M.D. of Mousehole Male Choir and M.D. St.Ives Operatic Society. Currently he is also M.D. of Penzance Choral Society.

In 2004 he led the choir in several memorable Centenary concerts and the making of its CD entitled ‘Let There Be Music’. In 2005, he directed the choir in the Cornwall International Male Choir Festival.

He regularly plays the pipe organ at various local churches and chapels. Timothy was previously awarded the Cornwhylan Cross and is to be made a Bard of the Cornish Gorsedd In September 2008, for his ‘outstanding contribution to music in Cornwall’.

In 2004, the choir celebrated its Centenary

In 2005 the choir participated in the Cornwall International Male Choir Festival first in the Hall For Cornwall then in Penzance with all our friends from Mousehole and Haydock male choirs and the outstanding Revalia Male Chorus from Estonia.

In September, the choir again joined with their friends, Rhos Orpheus Male Choir, and Denise Leigh for concerts on three consecutive evenings in Porthleven, Redruth and St.Just – a thrilling experience for all concerned!

2006:
The Apollo had another full programme of concerts in churches and chapels but other interesting venues included three Beach Concerts in Marazion, the East Terrace on St.Michael’s Mount, the garden of St.Theresa’s (our local Cheshire Home) and a marquee at St.Feock Gala.

In September the choir enjoyed a weekend trip to join our friends in Brixham Male Choir for their annual RNLI concert.

During this year, our accompanist Nigel Dower retired, and his shoes were filled by Maureen Hollow who is still ‘tickling the ivories’ on our behalf.

Proved to be another busy year with a full programme of indoor and outdoor concerts. A special feature that year was the opportunity to welcome a number of new members including young William, the M.D.’s son.

Early in the year we had been very fortunate in attaining the services of Paul Marks-Joffe,a talented young man as Deputy MD/Deputy Accompanist for 2007 and his work was much appreciated. He has now moved on to pastures new.

Laura Nicholas sang regularly in the choir’s concerts. She is a talented young soprano whose solo performances are a delight to the choir and audiences alike.

The post of Deputy MD/Deputy accompanist was filled by Kathleen Trewhella, well known locally for her years of dedication to music with operatic societies. This is her first venture into Male Choir music and we gladly welcomed her on to the ‘Staff’.

As well as a full programme within the county, which included singing at a wedding during August, we embarked on a trip to Brittany at the end of September for a weekend of performances with our Celtic cousins in that region.

The trip to Brittany during early October was a wonderful experience for all who were able to go and we presented three concerts at venues around North West Brittany. The choir was enthusiastically received at each event especially at Doulais where we were based.

During June 2009 our CD “In the Spirit” was produced in time for our forthcoming visit to California. It was also a chance to record songs with Laura before she left us to study at the Royal Welsh College of Music.

The trip to America to sing in the Cornish Festival in Grass Valley, California in 2009 took place during the second half of July.

After a 26 hour journey, which felt like 32 hours because of the time difference, San francisco felt like a very warm summer day in Cornwall with a gentle breeze. Following a relaxing two night stay we were transferred to Grass Valley via Sacramento. Fortunately the coach was air conditioned as the outside temperature rose from 83f to 104f before settling back to 88f at our destination, altitude 2500 feet above sea level.

The choir presented several concerts at Grass Valley and Nevada City as well as social events in local hotel bars, (they don’t really have pubs). At one packed concert hall we performed the world premier of “And so we Sing Trelawney” in front of the piece’s composer Mike May. All were very well attended and the generosity and appreciation of the town folk and host families was evident. We look forward to returning the complement to the Grass Valley MVC at the International Festival during 2011. We also had the oppurtunity to visit Sacramento, Lake Tahoe and Squaw Valley 1980 Winter Olympics venue, during our stay.

Later in the Autumn the choir was successful at the St. Austell Music Festival.

The year began with the Federation Charity Concert at Newquay, during February, in which some of our members took part.

In March we took part in the County Music Festival at Truro and followed that with concerts at Callington and Truro Cathedral during April.

Early in July we hosted the mixed Breton group “Meuzh Bro Konk” a choir with an accompanying music group. Their performance at Marazion Community Centre was well attended and appreciated by the audience.This was a return gesture having been hosted by them during our Brittany tour in October 2008.

During the summer season the choir performed al fresco during the afternoon on St. Michael’s Mount and at the harbour side at Porthleven, and was very well received at both. At Falmouth Pavillion an evening performance was given and was also well attended.

At the end of September the choir recorded its latest cd. It comprises three tracks and all proceeds from sales are to be donated to “Help the Heroes” the charity to support service personnel returning injured in current areas of conflict. Further details of the cd can be found on the relevent page.

Mid October saw us heading off to West Wales for a weekend of concerts at Whitland and Haverfordwest,together with our wives and lovers. During the day some members of the party enjoyed coach tours around the area while others chose to walk the coast path. The weekend proved, on the whole,to be a most enjoyable experience.

Early in December we presented our new Chrismas Concert format for the first time to an audience at Carleen Village Hall. It was much appreciated I’m glad to report.

For the Annual Christmas Concert the choir was once more joined by Helston Town Band which gave a robust and exciting performance from its repertoire and also The Richmond Singers who sang from a whole range of genres. They also joined with the choir to lead the whole assembly in the singing of seasonal carols.